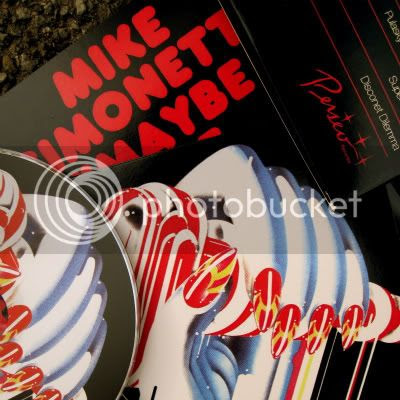 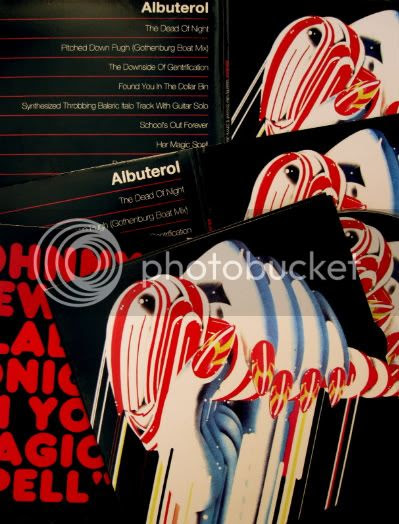 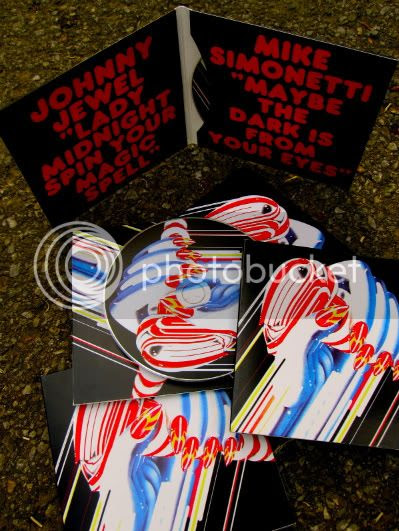 In December 2007, We threw a huge gala on a cold & rainy Friday
night in Portland with Chromatics & Glass Candy. Mike came out
to spin the party...the after party...and the party after the after
party... We spent the next three days recovering, working on a
mix, & trying to find a place for Mike to lay his weary head. The
damp & grey climate is great if you're writing Wipers lyrics...but
if you left your prescription asthma medicine (Albuterol) in Jersey,
you're pretty much screwed. Day 1 : Mike stays with Me at chez
Ruth / Daphne & Ruby (the sister cats) fur all over the apartment
causes Mike's asthma to flair up even worse. Day 2 : We decided
to relocate Monsiuer Simonetti to Ida's Candy Castle / Marlon's
(the stray cat) tiger stripes almost close Mike's eyes forever. Day
3 : Adam & Natty offer him a warm bed...but Pimp C's (the cat
freed from a shelter on the same day the UGK poet was released
from prison) dander just about closes Mike's windpipe. Then it
occurs to us...there's no cats at the studio, so we spend two days
& nights listening to crates of killer cuts from Mike's library in
New Jersey. Starting with around 80 songs and slowly narrowing
it down to 10 traxxx that really complimented each other. Step 1:
Burn all the records to disc through analog preamps ... Step 2 :
Edit the traxxx live using 3 cdjs. Step 3: Take the best edits and
blend them all together in one long take live to tape. No computers
were harmed on the set of this recording. At Italians Do It Better,
we love our computers... But for a mix this dirty, with almost all live
drummers, it just felt better doing it by hand. The end result runs
the gamut of rock, disco, proto house, boogie, swedish glam, bizarre
italo, soul, & some odd things in between. Not to mention the entire
mix is slightly pitched down. Most likely due to exhaustion & Mike's
almost comatose state. It just sounded heavier this way.
The weekend came & went, & it was time for Mike to fly home... On
our way to the airport, Ida chased a Fed Ex truck down Hawthorne.
Just in time for the flight, the Albuterol finally came. Mike took it &
all was well. There was so much confusion that weekend, I forgot to
label the tape. It got lost in the shuffle. Tours came & went. New
records were being made, & we forgot about it. Five months later
Mike found a rough mix of it on his ipod & ripped a really lo fi
version for the blog. The mix exploded (20,000 downloads &
counting), but no one could guess the full tracklist. A couple of
months ago we started Perseo & around that time I found the
original mix in Portland. Here it is ...the way it was
meant to be heard. Fully remastered back through tubes.