Mike on Beats In Space (again)

Totally forgot to mention this...I just djed on Beats
In Space to promote the little Sweden trip with Tim.
(see dates below)

There was an unfortunate dj 'incident' right after
Eddie Kendricks. Shit happens i guess. Its all
about song selection with this set!

Otherwise, it wasnt too bad. Feel free to criticize
me on my skills on the interactive vivaitalians
blog. Live drummers man... Its a love/hate thing
when it comes to mixing those fuckers sometimes.

I specifically played some blog tracks as well.
You can download the show or listen live at the
link below. Tim held it down though.

http://wnyu.org/
http://www.beatsinspace.net
Posted by Italians Do It Better at 4:19 AM 3 comments: 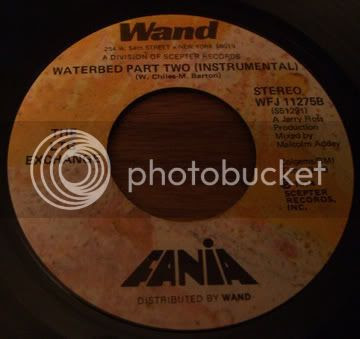 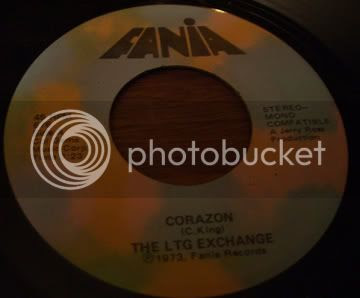 LTG Exchange were a criminally under-appreciated NYC
Latin group, with many many amazing songs. These
are just a few of them.
Corazon is yet another disco classic. Dimitri, Idjut
Boys, Jellybean Benitez, and a zillion more djs have
either comped it, cited it, or simply made it famous.
The song is the epitome of Latin disco funk. It simply
smokes. Its nearly perfect. BUT, if you want a real
killer track, Waterbed is insane. Not as Latin-
influenced as Corazon, Waterbed takes on a more
funky disco style, and at times can sound like a Latin
disco version of the funk band Makossa. The instrumental
is superior because the drums really stand out.

The 12" version of Corazon exists, but is pretty tough to
track down. I dont think there was a 12" of Waterbed.
But, like pretty much EVERY song these days, there was
an edit of these two songs on one handy 12"- but i havent
heard it. Just go on Ebay and get these 45s for cheap-
you wont regret it. Consider this my "bargain of the
month!"
Posted by Italians Do It Better at 4:33 AM No comments: Buari's an African heavyweight with many Afrobeat/African
dance records under his belt. Not as prolific as say, Fela-
but prolific nonetheless. Pretty much every track on this
record is great, but "KoKoSi" and "I Am Ready" are the
standouts. "I Am Ready" is a Loft track , and I think it's been
re-edited as well. (But really, what HASN'T been turned
into an edit these days)... The song doesnt need an edit.
Its nearly perfect as it is. Thumping Philly bass line and a
killer synth solo mixed with African chant vocals. Serious
shit man- a straight disco record with African influences.
Not a clunker in the bunch. Also, the lp is easier to find than
the 12" version- which has fetched upwards of $300 in the past.
Anyone got a spare copy???? :( Philly was kilelr last night-- you people know how to throw
down!!! Anyway, I played this song and three people
wanted to know what it was. I just expected everyone
to knew what it was, since it's somewhat of a classic...
So instead of telling people about it, I said "check the
blog"... (Actually, I didnt say that).
Anyway, Rigor Mortis rules. For 1977 this sounds pretty
ahead of the game. Also, yet another track with the
super disco break I love so much these days. It's been
sampled enough to recognize when it's played out.
Fans of "Bounce Rock Skate Roll" should get this one
too.
Also check out "I Just Want To Be" by Cameo. Its another
awesome track you can get pretty easily. Rigor Mortis
is a little more elusive.

Milhouse will be holding it down while I'm gone. Posted by Italians Do It Better at 4:31 AM No comments: There are like 6 records that Jah Wobble released
that all look similar to this one, but this is the only
one you need. The key element is Holger Czukay, who
jammed on this record in his post- Can days for a totally
killer post punk/ disco/ dub/ kraut rock/ ambient
masterpiece. "How Much Are They?" has made the
rounds with djs since its inception, and has been copied
to this day with the newer dub-influenced disco stuff.
Czukay's keyboard hook drives the song behind Jah
Wobbles dubby bass line. The vocals are sorta harsh
and add a punky element to the track, topping it off
perfectly. There seemed to be a trend back then to
make experimental dance music with samples and
chanty chopped vocals with a rhythm box- Eno & Byrne
(My Life in the Bush of Ghosts), Arthur Russell
(5 Minutes), Malcolm McClaren (Buffalo Gals)... The
list goes on and on. But this particular record was
my favorite.

As a added bonus, they dedicate this record to the
memory of Ian Curtis...

Dan Selzer can tell you more on this record. Dan,
feel free to add to this one, since you hipped me to it
3 years ago! Yet another killer find at WFMU. Getting in early
with a dealer badge really pays off! When it comes to
minimal synth stuff, this is considered a Holy Grail
by many, yet shunned by other collectors because
it has a dancey beat and too much melody.
Released in 1982, Pitch was a two piece NYC based
minimal synth group, and this self-released 12" on
their On/Off Records label is one of the more
mysterious NYC bands of the era. They existed within
the whole no wave scene, yet noone I spoke to knew
who they were. Upon further inspection I discovered
one of the principal songwriters, Marc Cantor, is an
internet and computer pioneer. His entire
bio is here:

But in a nutshell, he pretty much developed the
company known as Macromedia, and was also
responsible for programming the first ever licensed
music for a video game ("Peter Gunn" for Spyhunter).
And, he worked with the first Macintosh computers...
Today he is more known as a pioneer in the blog
world, believe it or nor- with his work in micro-
content publishing.

if you go to his blog:

you can find a link to a download of a track he wrote
in 1981. Totally rad!


This all makes sense when you think of it. He was
making computer music.. speaking of which, the A-side
"What Am I Gonna Do For Fun" is an amazing track.
Dry female vocals over what can only be described as
'cosmic minimal synth'. It can easily pass for something
that is popular today. The record cover is also awesome-
a multi color silkscreen job, which leads me to believe
this was a pretty limited run.
On another note, i am closer to getting this blog sorted
out and putting up music. SO keep an eye out. Part two of my killer scores at the FMU record
convention... When I saw this one i was also like
"what the fuck"?? I have only heard of this one
existing, but never actually seen one. The music
is soulful disco- almost Motown or Philly like.
But John Davis produced both sides, and added
his signature percussion to both sides, and the
result is a monster disco break. The break comes
out of the blue actually- towards the end. The
break sounds very similar to Apache or Scorpio,
so it's definitely a surprise considering the music
is straight soulful disco up until that point. The
a-side ("When Love Is New") is also awesome,
and similar- with a nice disco break. This is
definitely an oddly produced record, and a
nice one for me since i am on this disco breaks
kick these days...

last night I dj'ed my man Roy Dank's radio show on East Village Radio.
Look for his new label featuring a release by Jacques, as well as other
shit. We are doing a "Mystery Mix" mix cd with Roy as well. Anyway,
Mike starts about half way into the show, and attempts to dj without
headphones (he forgot his), but Roy shows up with headphones and
saves the day. You can tell when this happens when the records actually
start to blend together in true "dj" form. Also, good friend Piotr throws
down a few recods as well. Roy is a maniac. Here's the link:

Posted by Italians Do It Better at 12:00 AM No comments: This will be part one of my FMU record convention scores.
This was on my want list for pretty much EVER. When I
found it for $5 buried between crappy freestyle records I
almost shat myself. For real, those who know this record
and how awesomely rare it is can understand why i freaked
out. Just look at Ebay and it's $200+ pricetag...
First of all, Little Scotty is a blues legend. Somehow Peter
Brown squeezed a 4-song disco 12" out of him. Of all the P&P
related records, this has to be the most fucked up, and
thats saying a lot. (anyone remember Sweet Naomi's
drugged-out off-time rap 12"?) The track everyone will
know is "Shout at the Disco", mainly because it has a
famous breakbeat that all the djs want... But let's
talk about the track "Acid Freak". The title says it all.
Its a total Love-inspired super psyched-out and just insane
song. Pretty heavy acid rock- but the song falls apart at
the end. The drummer suddenly starts to play off-time
right before the song ends. The guitarist tries to catch up
but it doesnt work. Its the most insane thing I have ever
heard. It just makes no sense! Why would Peter Brown
keep the take??? Any sane man would scrap the song
and try again. A total trainwreck, and a total AWESOME
song!

Posted by Italians Do It Better at 5:16 AM 6 comments: If you know me, you know I have a warm spot in my heart
for Daft Punk, so when I found out Daniel Vangarde is the
father of Daft Punk's own Thomas Bangalter, I was pretty
stoked. Its great to know Bangalter has some legitimate
disco history behind him!

Both sides of this record are great. The a-side is "Intersidereal
Message", an uptempo spacey little number with a nice killer
break. But it's the b-side that particularly slays. Starbow was
the team of Kluger and Vangarde, who were part of the Paris
disco scene along with Cerrone, Don Ray, Claude Carrere, Alec
Costandinos, Ralph Benatar (who produced this track...) The
French were definitely down with the 'cosmic' sound early on,
and this track nails it straight on. Plus, it has a nice disco break
beat, something I love as well. Like most AVI releases, the
production is not bass heavy,and it tends to lend itself more
towards orchestration and songwriting instead of making a heavy
sounding record. On headphones, this sounds KILLER though.

Also, Kluger and Vangarde were the principle songwriters for
Ottawan, who had some big hits in Europe- but in America they
remained pretty obscure.